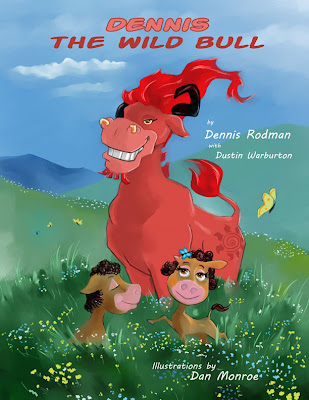 In August 2012 news broke that NBA Legend and Hall of Fame basketball player Dennis Rodman was working on a children’s book titled, “Dennis the Wild Bull.” Written by Dennis Rodman with Dustin Warburton and illustrated by Dan Monroe, The story went viral and captivated imaginations worldwide. While no details of the actual book were known at the time the mystery is about to be revealed. “Dennis the Wild Bull,” makes its official debut on February 2nd at 2:00 P.M at Andersons Bookshop in Chicago followed by an appearance at Book Revue on February 5th at 7:00 PM in New York. The official debut will be followed by a series of signings and school visits which will be posted weekly.

The book can be purchased for the retail price of $16.00 (USD) Orders may be placed on the "Book orders" page in this site.

The book is also available as an EBOOK  and can be purchased for $6.99 from Crossroads Press:
crossroadpress.com
Posted by Dragonbrusher at 5:29 AM